This was the reaction a friend had when I told him I was going to grad school to study divinity.

First, I had to explain what “that” meant. I would be studying theology and ministry in the hopes of becoming a chaplain. Then I had to explain what a chaplain was; a person of a specific faith/denomination who is assigned to/works with institutions like hospitals, a military unit, police departments or non-profits in order to provide spiritual guidance and support to the people in/accessing the institution. It’s a minister who walks with people through (extra)ordinary circumstances; who is there when life fails to make sense, or is too hard to handle.

It’s a vocation that places a person into the position of a rock in the rapids.

His reaction makes a good point. It’s not a lucrative career; I’ll not be making a six figure salary. It’s not something you hear little kids talk about when you ask them, “What do you want to be when you grow up?” It’s a lot of studying, writing papers, interning and discerning. Chaplains have told me that it’s long hours into the night and questioning every step of the way. On the surface, it seems to be work that has a lot of cost and not very much reward.

This is why I struggle with explaining my decision to friends and family. On paper, it seems insane. Heck, typing it out into a blog it sounds insane. But I see a problem in weighing the worth of work solely based on material reward. I try not to buy into the cookie cutter American consumer mold; work so I can buy stuff that will eventually break so I need to work more in order to buy better stuff to replace the stuff I already have. How do you explain a feeling of “being called,” or for the less spiritually inclined, feeling like what you are doing “fits” with what you want/need/require of life? 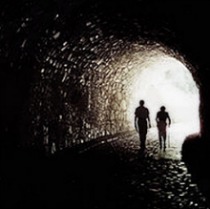 I’m terrified I could be wrong. I’ve gone down this path before; I’ve been in seminary and felt the call only to end up losing my faith and finding another. But, just like then, I have to give it a try. I have to walk down this path to see where it goes. I don’t want to be at the end of my life, regretting that I didn’t just give it a try.

I don’t expect people to understand; but at least I have family and friends who, even if they don’t agree with me, will take this journey with me. They’re my chaplains without even knowing it.

This site uses Akismet to reduce spam. Learn how your comment data is processed.