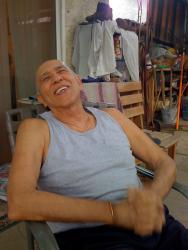 My father was a Christian in the best of ways; a human being who, despite his failings, would return again and again in love to the altar of God to find refuge in his faith. The way he lived taught me that what the Spirit of life and love craves is not perfection, but a relationship of covenantal love rooted in recognizing the worth and dignity of all people. He taught me that what makes a human being righteous before creation went beyond just claiming Jesus as his savior, but extending a spirit of charity toward every person who walked through the door of our home.

I remember my father opening the door for anybody; and especially for the missionaries who would come by our house. While I’m sure these men and women found many unanswered doorbells or maybe sharp words and slammed doors, when they came to my house, they would find not only a conversation at the threshold, but an invitation inside for food, water, and scripture. I am also sure none of them knew who they were about to deal with.

Missionaries and proselytizers would sit with my father, share food and drink, and he would ask them about their faith. Then, from under the coffee table, he would pull out his own bible with its notes and bookmarks and finger-worn pages, and give his own testament. There were many times when I returned home from school, where wide eyed missionaries would be sitting in my living room, unsure of what they had gotten themselves into.

My father modeled qualities of hospitality and mutuality – he never asked people to share his views, but he would argue his from the depth of his heart. And that when people come to my door, my response should be one of abundance; to share what I have, because the only response to grace is generosity paid forward.

I remember my father having an uncanny ability to predict trends twenty or thirty years before his time. I’ll be honest; I always thought that the aloe-vera juice, the copper tubing, the granola and all his other eccentric health behaviors were just leftovers from a wild time in the 1960s. But as I grew older, I found myself eating crow, as products now appear on shelves touting the healing properties of aloe-vera, and expensive sports clothing is being woven with copper thread. I am happy that he lived long enough to be vindicated in this way; which makes sense, because my father was also one of the healthiest people I’ve ever known.

My father modeled that it was important to take care of my body; and into his 80s he lifted weights, played tennis, and against our better judgement would climb the trees of our property to prune the branches with his chainsaw. In my own gym in Seattle, there is a sign which reads: “You don’t stop exercising when you get old; you get old when you stop exercising.” Which for my father was the secret to staying young; in heart and in body.

I remember that my house was where friends would come and be guaranteed to receive love and comfort. I suspect that for many, coming over to see me was just an excuse to come over and see my father. Which is not what a teenager or young adult wants; to admit that their own father is cooler than they are. I confess I rolled my eyes and cringed more than once at my father dancing in the living room to speakers blaring David Bowie or Queen when my friends showed up. Or wished that my father was “normal” when he would laugh so deeply that the walls would shake, or modeled the new copper tubing he had fashioned around his arm.

But my father loved to dance and loved to laugh and loved my friends. And I know for some, the love they received at my house was sometimes more love than they received in their own. Over this last week, one friend told me that Bill was more of a father to them than their own. And for many others, we was possibly a second father.

My father modeled his calling to love his neighbors as his God loved him; which from what I understand of Christian faith and scripture, is part of gaining eternal life. My father taught me that love was the most transformative part of being human, and for all those who have been touched by his love, I say do not grieve as other do who have no hope. Because my father continues to live, in our hearts and memories, just as he continues to live in reunion with God and with all of creation. Let us encourage one another with these memories.

I remember my father as someone who lived his faith through his politics. Given his social location, as a first generation Mexican American growing up in pre-civil rights United States, and coming of age during the height of the cold-war, he lived first hand the effects of poverty, racism, and militarization. He also reaped the rewards of the American dream, working hard, working smart, and building a life for himself and his family that he never had growing up. Because of my father, I am privileged with abundance: education, stability, food, water, housing, clothing, I’ve never known the pain of desperation. And I am deeply grateful.

My father modeled a liberal politic that didn’t look into his neighbor’s yard to covet what they had, but to make sure that his neighbors had enough, and if they didn’t, he would help. He would give of his time and money to care for people, and believed the country he loved and served should model the beatitudes he lived by: acknowledging the blessedness of the poor, the meek, the peacemakers, and the persecuted. He taught me that not only did I have a religious duty in the world, but a civic one as well. His politics moved my heart just as much as his religion. He was a deep believer, in people, in God, in love rooted in justice.

This isn’t to say that my father was a perfect man. While William Almeida liked to be right, he never, or perhaps very rarely, claimed to be perfect. And he relied on our love, and in God’s love, to get him through his dark nights of the soul. It was his wife, Judie, daughter Brianna, his son-in-law Matt, daughter-in-law Heather, grandsons Jason and Toby, and his chosen community, all of you gathered here and so many more who join us in spirit, who helped save him from himself. And when I find myself succumbing to the pressures of a full and overwhelming life, it is my father who reminds me that nothing is impossible for the Spirit of life and love; that it bends the arc of history toward justice and it transforms sinners into saints.

My father is a testament to the power of humility, forgiveness, and redemption that is only found in the depths of relationships rooted in love. My father modeled that I didn’t have to be a perfect man to be a good man; that integrity and compassion and gratitude would reap abundance – not in wealth or power, but in family and in friendship. My father, William Almeida, lived the words of his prophets: “To act justly and to love mercy and to walk humbly with your God.”

3 thoughts on “Eulogy for my Father”

This site uses Akismet to reduce spam. Learn how your comment data is processed.